Fellow Baffled Ones, greetings. Here is our Hilda Bear. Hilda enjoys knitting and wearing hats. She likes to make sure everyone in the house is feeling comfortable. When she isn’t knitting she likes to visit them all. Today she is going to visit our Door Stop family. 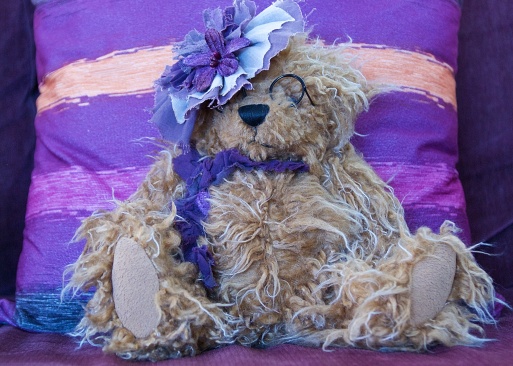 Hilda’s first stop (chuckle) on our way is with Owly Homebody Stop. Homebody likes the feel of gentle breezes from the window at night. From his door he can often see up and out through the window to the night sky. He likes the sky.

Further along  we come to Owly Passageway Stop. Hilda and Passageway admire each other’s sense of colour and style. They often discuss hats and fabrics and patterns. Passageway often feels pleasantly warm from the dappled sunlight that comes through the windows along the way and can sometimes see birds. She has never seen an owl out there though. 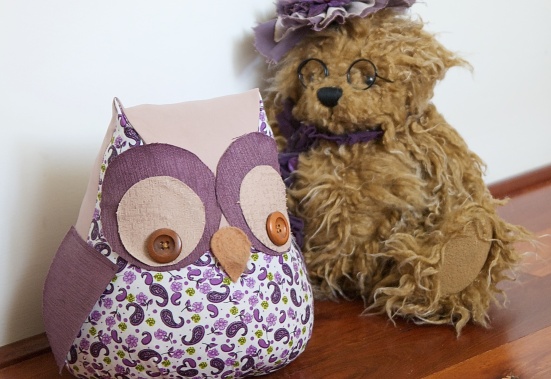 Wandering along, Hilda reaches Penguin Stop. Penguin has an important door to Stop but his duties are light. He only has to work when the wind blows really strongly against the front door. Most of the time he chats the day away with the floor ducks by the potted plant.

Over by the family room entrance Hilda meets up with Dora Cat Stop. Dora is a good source of gossip. She has the prime central position to see all the comings and goings.  Hilda likes to catch up on what Dora has noticed lately. Has Dora, for instance, noticed the fridge being refilled with Honey-Choco-Mello-Creams? If so, Hilda will let Mawson know and raids on the fridge will be attempted by the bravest of the bears. But today Dora’s news is disappointing: no honey-choco-mell-cream shipments to report.  Oh, and who is that in the background?

Yes, its Shaun Sheep Stop. Shawn is our latest Door Stop Family member. He still looks bewildered by his new surroundings. Hilda has visited every day to reassure him but he still looks like a,well, a lost sheep. 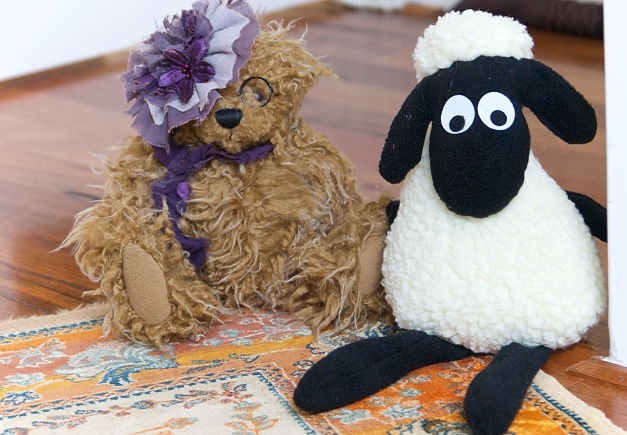 Do you have a Door Stop family? Do they like hats too? Do they look sheepish? Do they like to gossip? What about Owls? And have you spotted movements of Honey-Choco-Mello-Creams into a fridge near you?

You have wandered into Mawson Bear’s web-den. Mawson is a Ponderer of Baffling Things (between naps) and the Writer-Bear of It’s A Bright World To Feel Lost In . ‘Reading this book is like receiving a great big hug of reassurance and a huge hot chocolate with fluffy marshmallows.’ Review by Lady Bracknell

I am Mark, Guardian of Mawson Bear. Mawson is a big hearted, soul searching Writer-Bear. His little books are stuffed with moments of happiness for frazzled grownups. Why not slow down and relax a while with Mawson's friends in their cosy, whimsical world. Refresh the soul in the tranquility of innocent hours and simple joys. View more posts

One thought on “Explorations to Do Indoors: Hilda Bear visits the Door Stop Family”

This site uses Akismet to reduce spam. Learn how your comment data is processed.